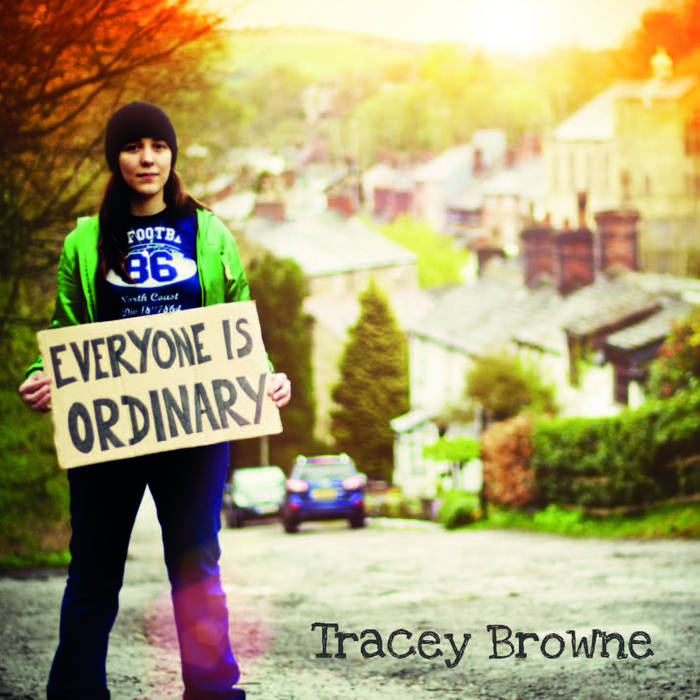 straight4ward Everyone is ordinary - says she who clearly isn't.
An extraordinarily talented singer songwriter playing music I can happily listen to all day long .

Across The Universal Soundscape

Well a cursory first listen to Tracey Browne's debut album could easily invoke comparison to a host of singer-songwriters...

A British Joan Osborne perhaps, a 21st century Kirsty MacColl, a folkier Sarah McLachlan, a poppier Karine Polwart...they've all been mentioned, but who knows...and who cares; before that first listen is over you'll more than likely have reached the conclusion that Tracey Browne transcends comparisons, and with those oft neglected virtues of a fine voice and a great melody, she's already taking you some place else, some place all her own.

Having grown up in Cambridge and re-located to Manchester several years ago, Tracey has honed her craft in a rich variety of musical settings, from full throated rock vocalist with the short lived but acclaimed Minus One Raver, to purveyor of intimate folk songs in acoustic venues, either solo or with her trusted 'Team Tracey'.
She is also live backing vocalist/keyboard player for Thea Gilmore, whose last two albums she appears on, and an in demand studio sound engineer working freelance mostly at Manchester's Airtight Studios, a regular stop-off for King Creosote, Emmy The Great and I Am Kloot amongst others.

But it's that voice and those songs that will have you reaching for the repeat button.

Often deceptively straightforward and shot through with a pop sensibility, Browne's material seems hand crafted to catch those fleeting, transient moments, the times in lives where the axis tilts, the season begins to change and the balance hangs...

Listen to her unflinching honesty as the lover caught in the stay-or-go moment of "Paradise Found", hear the struggle between vulnerability and defiance in "Comfort Brings Pain" or the unassuming epiphany that is the exquisitely fragile "River City", one of the album’s highlights.

Elsewhere she's ruminative on the loss of musical innocence on "The Girl I Knew" and hilariously cutting while sticking it to a diva on "Under The Radar". Always she's direct and honest, and a teasingly memorable phrase or hook is never far away.

"Everyone Is Ordinary" was produced by Nigel Stonier, who has worked with artistes from Martha Wainwright to Fairport Convention, from Thea Gilmore to Clare Teal. Stonier also played guitar and keyboards on the record, and there are guest appearances, from Thea Gilmore herself, from revered roots accordion player John Kirkpatrick, and from violinist Sarah Kemp (Lanterns On The Lake) as well as longtime Browne collaborators including fellow Mancunian songwriter Becca Williams (Becca and the Broken Biscuits) and James Trott (aka Jacob H James, himself receiving overdue acclaim and national airplay for his solo work).
The album is mixed by ex Earlies member Tom Knott, who worked on Paul Wellers "Wake Up The Nation" album last year.

A live Tracey Browne gig is a thing of unpredictability...a sparky, guitar toting Ani diFranco-like onstage presence, she will deliver solo acoustic versions of many songs off the album... but dont be surprised if she slips seamlessly into an all acoustic AC DC or Skunk Anansie cover...and expect her celebrated punked up version of "Fame" at some point in the proceedings...

"Everyone Is Ordinary"? Debatable.

In the over populated landscape of singer songwriters, Tracey Browne most definitely isn't.

Often deceptively straightforward and shot through with a pop sensibility, Browne's material seems hand crafted to catch those fleeting, transient moments, the times in lives where the axis tilts, the season begins to change and the balance hangs... ... more

I can’t move on ‘til all this is gone
From the tip of my tongue
At the top of my lungs
And it might not seem fair,
Or like I’m not aware of the
Pain that you feel
It takes longer to heal than
All these bridges we build
Just burn ‘em down,
‘Cause I won’t leave you safe and sound
And as these feelings come round
Just remember although it was lost
We had Paradise Found
Even if it is lost, for a time
We had Paradise Found
I haven’t lost like this in such a time
It’s ironically done,
It seems you are the one for me
And now you’re scared,
And I’m so unprepared
To convince you what’s right
And it won’t be tonight, but...
All these things that we’ve said
They’re all coming down to the
Question in our heads
If I let myself drown
Will I be lost?
Or will we have Paradise Found?
And I don’t want to lose for the gamble
Of Paradise Found
And have you now fallen in love
With each and every part of yourself?
The truth and lies
The needy and strong
The balancing act, and the falling down
It’s hard to know when it’s time to let go
Should I just step away
Is it worth it to stay?
Do I send you a sign
Or just give you some time
To decide what you need,
And it might not be me, but...
Every path that we take
Could lead us away from the
Heart we might break in the end
And every choice that we make
Could bring us back home to the known
To Paradise Found
And the trust in your heart, and your love
Is like Paradise Found
Track Name: Under The Radar
Under The Radar
(N.Stonier/T.Browne)

Out past the Christmas lights
Down by the riverside
The water looks still
But it glides, travelling silent
And this is the quiet time
So I sit and calm my mind
‘Cause I think a storm’s gonna come
Sweep me away
River City
You have so many faces
Just like me
Tell me, d’you know where the true place is
That our centres lie?
And I have been here before
Told myself nevermore
To let myself go for a promise
Of something I’m missing
In a cycle of poetry
The clues there for all to see
So bring on the storm and I’ll stand
Open and ready
River City
For my dreams to awaken
Put your arms around me
Tell me that everyone’s mistaken
And you really love me
River City
As the past floats away more
I am sitting pretty
‘Cause I have so much to stay for
And this is my time
Track Name: The Mountain Goat
The Mountain Goat
(T.Browne)

I don’t wanna be responsible
For all the things I’ve been running from
But I’m stopping right here in my tracks
I don’t wanna be the lonely one
I’ve had an image of a loaded gun
Pointed at my spirit,
So pull the trigger on it
And find me
Find me again
It’s all about me
I, and Me, and My Best Friend, My Ego
I know there is something more than this
I’ve had a vision of perfect bliss
But I don’t want to let go of my pain
My desires
And sometimes I love what makes me sick
I treat my body like a piece of shit
But somewhere I know I’ll be loving it
And that’s enough for me
So blind me
Blind me again
It’s all about me
I, and Me, and My Best Friend, ‘cause
I am so very special
And I am so loved by you
I have my own chosen friends
Who don’t question a damn thing I do
And I am my own messiah
And my soul burns like the fire
I’ll sing my stories to you
And you’ll listen, you’ll listen
You’ll listen until I’m through
I just want to be the loved one
But I don’t really trust anyone
So my life is backwards, and upside down
Maybe music is a caring thing
Working better as a sharing thing
Instead of always imagining
What it can do for me
So leave me
Leave me and don’t return
You’ve deceived me
I, and Me, My Worst Friend, My Ego
My Ego
Track Name: Look Through Water
Look Through Water
(T.Browne)

My Little Wheels are tired
‘Cos they’ve been spinning around all night
And I can’t slow them down
But now I’m feeling inspired
In spite of everything I am
Still wandering through
And it’s one foot before the other, it’s true
I get a hundred denials
For every good idea that I have
But they’ll disappear in time
‘Cos every obstacle helps me
To sharpen up my vision, and my will
To discover those pearls
If there’s one thing I’ve learnt,
It’s you can’t control the world
And I try to make sense of me and you
And I’m trying to understand
But it’s a long time coming
And I don’t need your hand
My Little Wheels are working
Though they were silent,
There’s just enough of this fuel
To move them to
You’ll never make me stop trying
Even with all of the guilt, and the doubt, and the blame
You haven’t smothered this flame
And I’m stronger to know that I’ve coped with it
In my way
And I’m high on the love that I get from my friends
And I’m fine now I know that each choice
Is just mine, all mine, all mine, all mine, all mine
My Little Wheels are tired
‘Cos they’ve been spinning around all night
But I don’t want to slow them down
Track Name: Kate Rusby
Kate Rusby
(T.Browne)

Bandcamp Daily  your guide to the world of Bandcamp